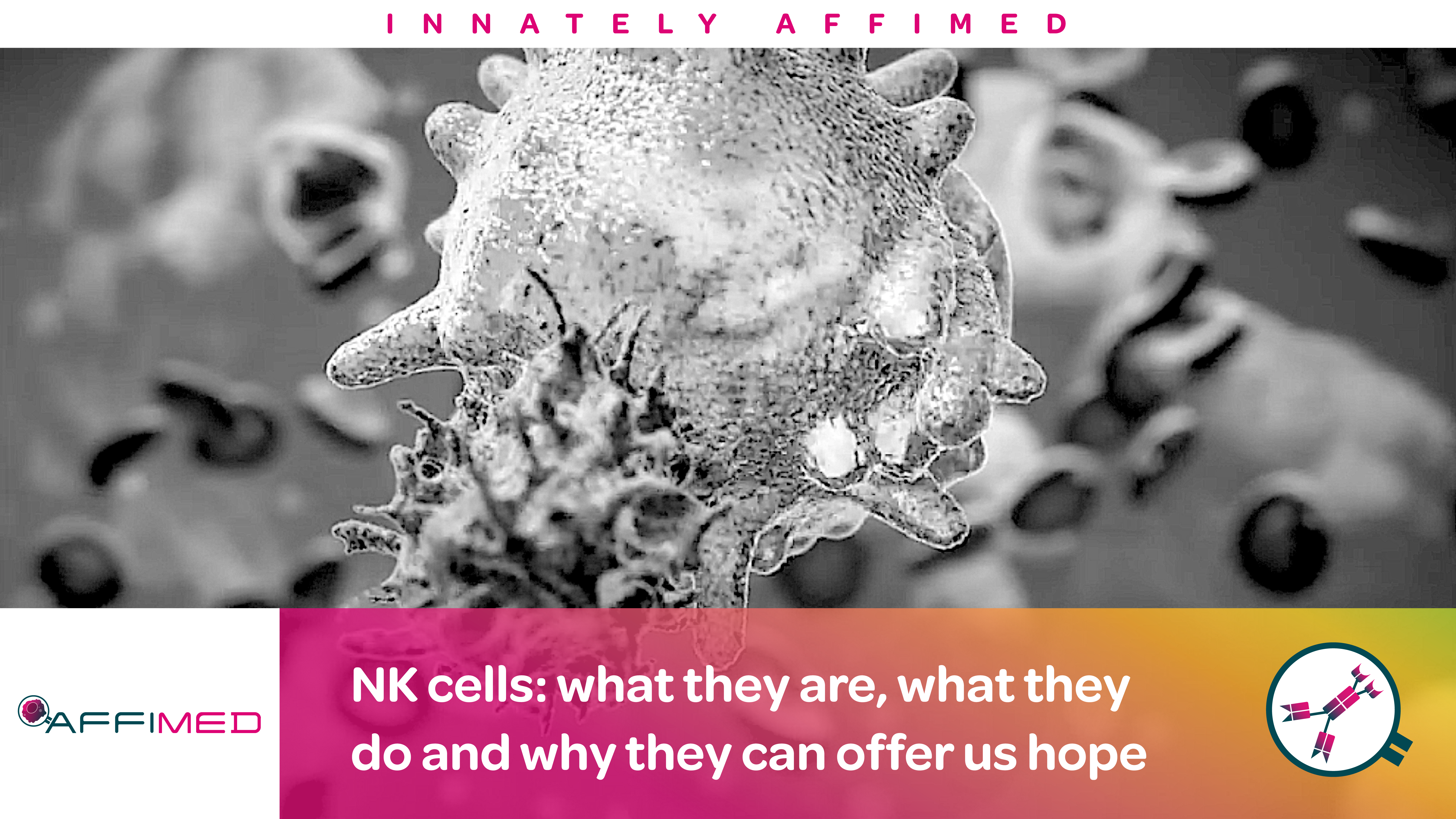 NK cells: what they are, what they do and why they can offer us hope

Long known for their crucial role in fighting human pathogens, natural killer (NK) cells have been recognized for other exciting tasks in the past years. Especially their role in fighting cancer has gained a lot of interest. The stakes are high: A breakthrough in innate immune-oncology is expected to be a quantum leap in cancer therapy.

NK cells are an essential component of the human immune system. They belong to the innate arm of immunity, which positions them at the first line of defense for example against virus infections. In this sense NK cells along with other innate immune cell types keep up the body’s defense until further specialized adaptive immune cells can join the battle with the full armory of the immune system in a concerted manner. Interestingly, NK cells also have an impact beyond the control of infectious diseases, as they are inherently powerful at preventing cancer by recognizing and killing aberrant cells.

So, let’s have a closer look at these special cells. As the name natural killer (NK) cell already suggests, NK cells possess cytotoxic activity, meaning they have the ability to effectively kill and eliminate aberrant body cells, altered in their appearance by virus infections or through malignant transformation. In contrast to the killer cells of the adaptive immune system (e.g. cytotoxic T cells), no prior activation is needed. This makes them the ideal rapid response force in the human body.

There are two major ways by which NK cells influence other cells. First, they can directly lyse cells that have become infected with a virus or have undergone a malignant transformation. This so-called cytolytic function of NK cells can be initiated through a variety of processes and is critical for the clearance of diseased cells. Second, NK cells can produce a variety of signaling molecules, called cytokines, that can amplify activating signals for the immune system. Both NK cell effector functions are essential components of the immune response and are the primary mechanisms through which NK cells can mediate protective immunity against various pathogens.

The origin of NK cells

Detecting foreign and aberrant-appearing cells while not attacking or damaging healthy human cells is a colossal effort of the immune system. No wonder that its development and function is highly complex. NK cells own their share in the intricacy of this system. NK cells originate in hematopoietic stem cells in the bone marrow. Full NK cell maturity is achieved in stepwise processes after several distinct progenitor and developmental stages. In general, there are two populations of mature NK cells in blood that can be characterized based on the expression of two cell surface molecules, namely CD56 and CD16A: the CD56bright CD16Anegative population (~5% of blood NK cells) and the major CD56dim CD16Apositive population (>90% of blood NK cells). CD16 will deserve more attention later in this article as it plays a central role in our approach to fight cancer.

Leveraging the immune system to fight cancer has been a hot topic for quite some time now and has led to several approved therapies in the past 20 years. Although many patients have already benefited from the first wave of these therapeutics, there are still no treatment options available for many others. Most of the pursued approaches have focused on enhancing adaptive T-cell responses – either by targeting inhibitory pathways (e. g. with immune checkpoint inhibitors) or by targeting activating pathways (e. g. with chimeric antigen receptor T cells). We at Affimed are following a different promising avenue in cancer immunotherapy. Our approach aims to unlock the power of the innate immune system by targeting particularly NK cells and macrophages. We strongly believe, this is the key to help more patients.

NK cell engagers on the rise

We are leveraging the NK cell surface molecule that has been mentioned earlier in this post: CD16A. With CD16A being present on the vast majority of mature cytotoxic NK cells and conveying a major cell-killing process called antibody-dependent cellular cytotoxicity (ADCC), we were able to show that this molecule is a promising target for our therapeutic bispecific antibodies. And that is why we have focused our development on perfecting their binding to the CD16A receptor: Our innate cell engagers (ICE®) target a binding site at CD16A, which allows for strong and high affinity binding regardless of CD16A polymorphisms. The binding is not inhibited by IgG present in blood as the binding sites of our ICE® molecules and IgG are distinct from each other.

NK cells have a central role in human immunity. They are best known for their contributions to anti-viral immunity and tumor immunosurveillance. Interestingly, NK cells are also considered to remember certain previous infections, resembling to some extent traits of immunological memory, which may extend their importance beyond innate immunity far into the field of adaptive immunity. There is still a lot of research going on elucidating the crosstalk of NK cells with other cell types of both the innate and adaptive immune system. While we expect more secrets of NK cells to be unlocked in the future, clinical data from Affimed and other companies strongly suggest that actively involving NK cells in particular, and the innate immune system in general, in the fight against cancer is the right path to follow. Innate immunity-based immunotherapy heralds promising times ahead, giving hope to cancer patients.