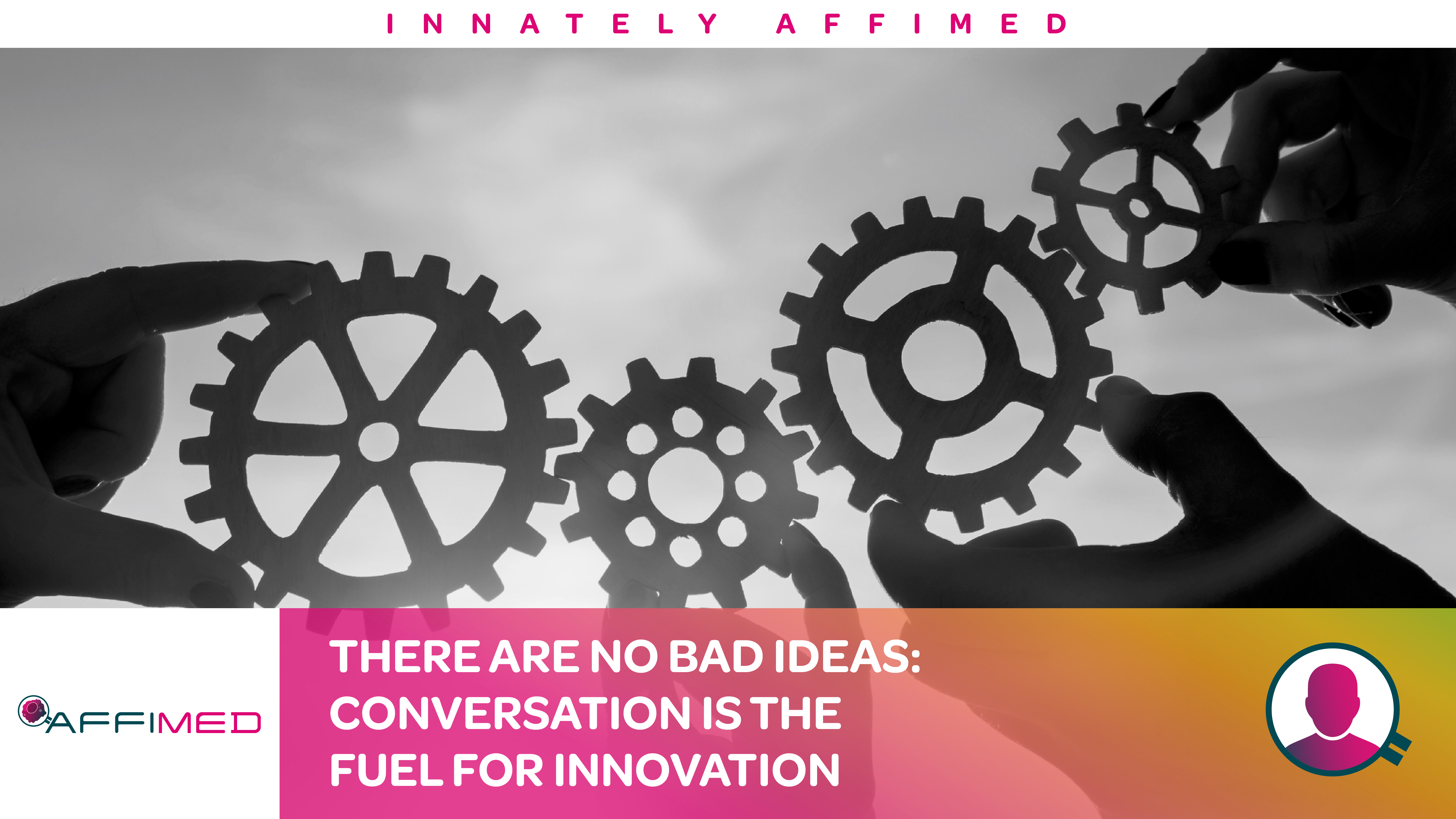 There are No Bad Ideas: Conversation is the fuel for innovation

One might think that innovation begins with an idea, but more often, it begins with a problem. The solution, surprisingly, is a social one. It starts with a conversation.

The picture of the inventor toiling away, alone, in the wee hours of the night is a quaint one—but at Affimed, we know that the real powers fueling innovation are the people and the minds that work together in courageous exploration, discourse, passion, and openness. This is why we pick the best thinkers and then create a culture of diversity where, on a daily basis, they set their sights on solving the serious, complex problems that cancer patients face.

Ironically, for innovation to succeed, there must be an understanding and appreciation that sometimes it won’t. It is precisely the power of not dismissing an idea before it is fully explored that gives innovation its life, which subsequently breathes life into the conversations that are a core part of the Affimed culture. It goes beyond talk. It’s listening, engagement, connection, and trust.

Even in my everyday conversations, it’s by talking to people that I get to appreciate our colleagues deeply who are contributing to innovation across the organization, no matter the role. In that spirit, I invited Joachim Koch, Vice President Translational Immunobiology, to share his thoughts about what brought him to Affimed and what an innovative culture means to him.

The Desire to Help Patients

I came to Affimed after 18 years in academia focused on biochemistry, immunology, and immunobiology. My goal had been to become a professor, combining research and teaching. I was fascinated by how nature worked. I dove into recombinant antibody development, vaccine development, and adaptive immunity—especially tumor and viral immune-escape mechanisms. I started working on innate immunity with a strong focus on translational research of NK cells for more than eight years.

In fact, you could say that one reason I joined Affimed was an appreciation for and curiosity around the beauty of the NK cell. That passion, along with the reality that in academia, it is very difficult to translate research results into clinical settings for the benefit of the patient, was a main driver. Affimed gives me the opportunity to apply this knowledge toward continual discoveries that actually lead to better treatment for patients.

With the Translational Research and Innovation team, a department made up of currently 20 people (and growing), we work to basically understand and enable the cells of the innate immune system to fight cancer cells. Just as our work is grounded in the innate immunity of cancer patients to heal themselves, it is similarly grounded in Affimed’s culture—a culture that fosters our innate ability to innovate.

Personally, I’m driven by ideas; it’s how my mind works. I see something and immediately I’m flooded with additional thoughts and ideas about how it could be improved. At the same time, I’m very open to the thoughts and ideas of other people. People have all kinds of ideas—maybe even “crazy” ideas—but instead of telling them why something won’t work, I’d rather think about how I can help them turn their idea into something real. Something useful. How can we bring their idea to a fuller discussion with more people until something remarkable develops?

I have seen this approach pay off time and time again where a thought led to a conversation that led to a novel antibody format or construct, for example, that then was submitted as an IP application. For innovation to work, no idea can be dismissed as a bad idea. Every idea is worth having a conversation about in order to uncover its hidden potential. I am surrounded by people who think the same way.

A Huge Pool of Ideas

To put it plainly, we think a lot. As a biotech company, we’re tasked to come up with novel ideas and solutions. As a small (but growing) biotech company, you have to be even smarter. Being smarter means drawing from a huge pool of ideas and then selecting for the right one(s) based on open-minded discussions. Part of that is working with a cross-functional team we call the Innovation Circle, formed in 2020, whose goal is to identify gaps throughout the company’s programs and find solutions for particular problems. It is a deep and rich pool to swim in, and the mix of people makes all the difference.

Any company can call itself innovative, but what makes Affimed unique is the diversity of perspectives representing various functions of the company. We are broadening this approach even further by creating a process where the entire brain pool of the company, from the administrative folks to the scientists, can contribute ideas that will be thoughtfully evaluated, because essentially, innovation depends upon the unpredictable, smart ideas that are generated when people sit together and talk.

It starts with a conversation.